The On Cloudstratus: A First Look

I got the On Cloudstratus because it looked like a good alternative to the Cloudflyer, my favorite running shoe from On.  The Cloudstratus features a dual layer of Cloudtec pockets and has a composite make-up of Helion superfoam mixed with another type of foam that On likes to use.

I will have a more in depth article on the On Cloudstratus after I run in the shoes more, but in the mean time, go ahead and check out my video above to see and hear more about the latest offering from On.
Posted by Will Rowan at 3:07 PM No comments:

The On Cloudstratus has been released!

On 20 June, On released their latest shoe, the On Cloudstratus. It is a running shoe that has a double layer of Cloudtec pockets, contains On’s latest superfoam called Helion, and incorporates elements from other On shoes such as the star lace pattern from the On Cloudflyer and the asymmetric upper that I’ve seen on the On Cloud shoes. 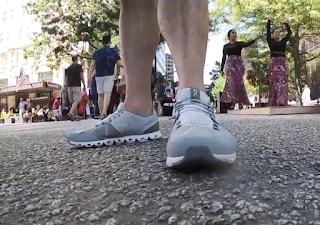 I’ve been a fan of On and their shoes for almost two years now. I’ve owned several of their shoes and did reviews of them on YouTube. I even bought a pair of their limited edition On Cloud Edge last year, which is now known as the Cloud Terry, and I still wear them to this day because of their comfort and durability.

But recently, On has had an issue come up with this year’s shoe models that have gotten several groups and fans a little upset: the heel interior’s fabric will rub and form a hole when your heel will come in contact with the shoe. A hole may even form on the top of the shoe at the heel area. This all sounds like the fabric has friction problems. My On Cloud Edge has this issue, but it’s from me wearing them almost every day for everything.  My On Cloudswift are only three months old and they have formed a hole in the inside. Nowhere near as big as Chris Ford’s On Cloudswift.  This is definitely an issue that On needs to address, but I honestly don’t think it will be fixed until they release next year’s models of running shoes.

In the meantime, I did debate on getting the On Cloudstratus. While the hole was a concern, personally it was mostly a cosmetic one, even though no one can see it unless I take the shoes off. Also, On has never disappointed me when it comes to the durability and comfort of their shoes.  As a fan of On, I can overlook the shoes’ ability to collect rocks and burrs because I know about it and can adjust my running habits (and routes) accordingly.

And I’m hoping the On Cloudstratus is another good substitute for the On Cloudace, arguably the best cushioned On shoe.  The On Cloudflyer is a very good alternative to the Cloudace and I want to find out if the Cloudstratus will rank there as well. I’m still a fan of On and their shoes, but I don’t want to blindly follow them and buy everything they have (and praise all that they do without checking and testing it out beforehand). I’ll have something on it shortly after the shoes arrive in a few days.

In the meantime, check out my review on the Cloudswift and Cloudflyer running shoes.

Posted by Will Rowan at 2:16 PM No comments: