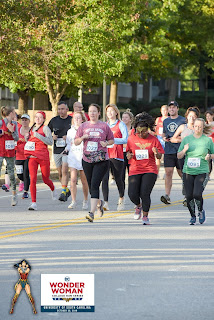 Columbia has a running problem: people love to run. So much so that on 26 October, I counted at least three races around town and one happening up in the Greenville/Spartanburg metropolitan area.   Strictly Running had their Halloween Run 5k, the Go Leo Go 5k would take place at Saluda Shoals Park, and the DC Wonder Woman College Run Series happened at the University of South Carolina. Since I would work at the university library that day, it made sense to me to go for the Wonder Woman race and head to work afterwards. 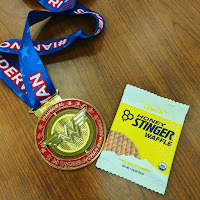 I head out and park at the Bull Street Garage, which is free on weekends, and walk down to Blatt Fitness Center where the start/finish line and assembly area are.  At packet pickup, I am greeted by Erin of Grit Endurance and get my shirt and bib.  I love this shirt; it is a red performance shirt with the Wonder Woman logo on it.   Most of the people around me were college aged, which passed muster because the university had been promoting it, at least in the library.  And speaking of the Thomas Cooper Library, they showed their support by having a table set up to talk about its recently acquired vast comic book collection along with a Wonder Woman display on hand for picture opportunities.  As I got to the back of the start line, as per my usual ritual, I noticed that I am basically one of five males in a sea of red wearing women.  That didn’t bother me much, because as the run promotes, “#IAMWONDERWOMAN.”

The run kicks off with the DJ counting down and Erin also letting us know to get ready.  The course we run is the same course that I ran last year from the UofSC Family Weekend 5k.  And then I remember the hills.  The course route looks like squished Big Dipper constellation, but with an uphill built into the beginning and end of the course.  That second mile is nice and flat, especially since it goes around Hand Middle School, and unlike last year, directions along the course were better because I did NOT take a turn a street or three early (like a few others and myself did last year).  Throughout the course, the sea of red shirts from the start of the race would trickle down to a stream before culminating into a little pond of crimson at the finish line.

The finish line had the usual assortment of refreshments and snacks for participants, with one exception.  Apparently, Honey Stinger is a sponsor of the DC Wonder Woman race series, and that made me pretty happy. I will eat their waffles all day long and seeing them at the event really made my day because that meant I didn’t have to break into my own stash of Honey Stinger goodies.

It was a nice fun run, the medal was very bling-y since the middle spins around, the shirt was great, and it was a great chance to go through a part of the Gamecocks’ campus all in one stroke. No pressure to win, just good times to enjoy. 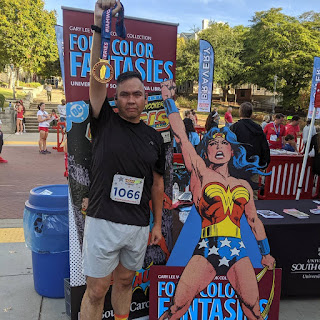 Posted by Will Rowan at 9:59 PM No comments:

The Hoka One One Sky Arkali - Best of Both Trail Worlds Or a Jack of All Trades? 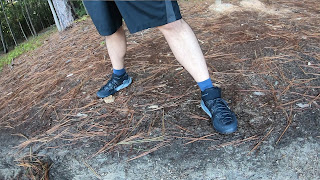 The Hoka Sky Arkali.  A shoe that combines attributes of a trail running shoe with a low-cut hiking boot.  The theory is that taking the best features from each category would yield a jack-of-all-trades shoe for hitting the outdoors.  The idea is sound, but in a vein similar to hybrid bicycles, which combine of a road bike with a trail/mountain bike, it does not always go as planned.

Don’t get me wrong, the Hoka Sky Arkali is a great shoe, but as I go over my findings, it will become more clear which activities one should undertake with these shoes.

I originally received my pair of Hoka One One Sky Arkali from the folks at www.runrepeat.com and I wore the shoes for about a month.  I hiked, ran, walked, cycled, kayaked, and worked in them and this is what I found. 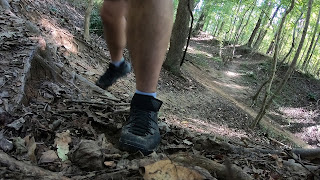 For hiking, these shoes are wonderful.  They are lighter than other hiking shoes I’ve worn, they appear very durable, and they grip the ground so well.  My feet felt great while hiking and walking about in the woods, partially due to Hoka’s cushioning, and partially due to the breathability of the upper.

However, the Sky Arkali are a different story when it comes to running.  Don’t get me wrong, these shoes are well constructed, but the breathability factor severely goes down because you are moving so much quicker and often.  Also, the Sky Arkali are heavier than my other trail running shoes, which is weird to me because as a pair of hiking shoes, they are lighter than my old hiking boots. 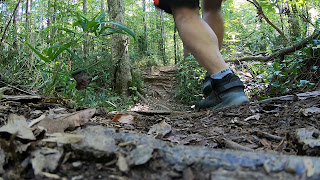 The Hoka One One Sky Arkali has several features that make it stand out from other trail shoes.  From the top to the bottom they are:

The MATRYX upper, which includes strands of Kelvar for durability and strength.  Being a former Army guy, I can tell you that Kelvar is not breathable, but it takes a whole heck of a lot to rip and tear. Fortunately, the MATRYX upper is really just a sleeve-like layer that goes around the shoe and not on top where the tongue and toe box are located.

The front has a high-abrasion rubber toe cap to protect that area.  It is not the same at a steel toed boot, but I did appreciate the small extra padding whenever I did hit fallen branches or more roots.

The PROFLY midsole appears in other Hoka shoes but I personally don’t know of any of my friends using them, but the PROFLY’s usage shows up in the Mach 2, the Cavu 2, and the Elevon. All I know is that I had a very cushy ride while wearing the Sky Arkali. 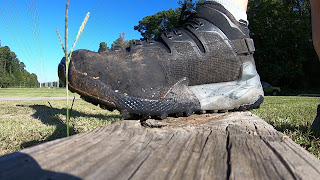 Two Velcro straps to fitting the shoe around your ankle and heel.  The forward and back Velcro straps are a great boon since they help lock in how tight, yet comfortable, you want the shoes to be.  Only once did a strap come loose, and that was when I tripped over a root and almost fell hard. Almost fell, but twenty feet of stumbling later I recovered.  Because of the location of the Velcro straps, the Sky Arkali sits like a high-top shoe, and this greatly helps with reducing debris coming into the shoe and I definitely did not need a gaiter while out on the trail.  The shoes also feature the longest length for shoelaces I’ve seen yet; I’ve never owned or seen a pair of shoes where the laces start at the top and end almost where my toes end. 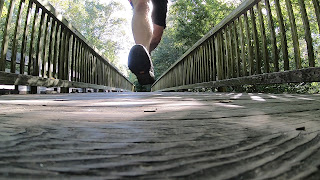 The outsoles are the best part of the shoes, in my opinion. I have been a huge fan of Vibram outsoles since my deployment times in the military.  Over half my boots had Vibram outsoles and they lasted a lot longer than other boots’ outsoles in Middle Eastern dirt, sand, and rocks.  Vibram outsoles have a history of durability, reliability, and dependability.  They will outlast any other outsole that I have owned or worn.  The grip is phenomenal, but I would expect nothing less from Vibram.

While the hiking and running are what most people would be interested in, I do like the Hoka Sky Arkali when it coming to cycling as well.  I do not own clip shoes that most cyclists wear, but I absolutely love wearing trail shoes whenever I ride my bicycle because the outsoles grip the pedals so well, I never have to worry about losing traction while pedaling. 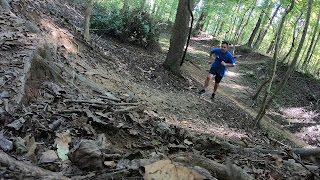 The shoes are not waterproof, but I still wore them while kayaking. I had a few muddy areas that I had to traverse before getting in and getting out of the kayak, and the Sky Arkali definitely helped keep me upright and not fall while getting in my little ride. 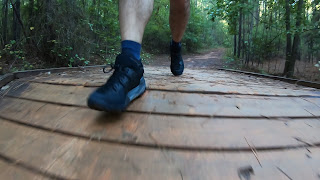 Besides the shoes not being the best suited for long distance running, my major sticking point with the Hoka Sky Arkali is the price point. At $200 USD, £170.00 UK, and 200,00 € EU, you need to be sure that you want these shoes.  They make great hiking shoes, especially in cooler weather, but considering I live in in the southern United States, I am reluctant to wear them in warmer temperatures.  When winter comes, there is no doubt that I would break these shoes out for a winter trail run or hike, though. 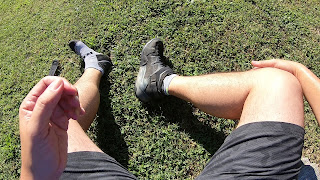 You can see my first impressions of the shoes here:

Posted by Will Rowan at 6:00 AM No comments: