Don't Run With Race Swag On Your Back: Use the Bag Check (or Gear Check)

Several days ago, I ran in a very popular local race, the Get to the Green.  I took part in the 5k event, which had over 1400 people in it.  Over 250 people went the extra mile by going for the 10k or even the 15k race.  While I don’t remember seeing anyone in that group do this, I did notice quite a few people running in the 5k with their drawstring bags on their backs.   Some runners barely had anything in their bag as evidenced by it being almost flat against the runners’ backs but there were some who looked like they had an extra shirt, jacket, maybe a towel, and some other items in their bags.  Those people’s bags sloshed around on their backs and you could see the drawstring pulling on their shoulders.   I think this was one of the very few things the organizers could improve upon for future events; the inclusion of a gear check area.

What the Get to the Green Race looked like

I rarely bring a bag with me to a race; I usually leave any gear in the car at the parking lot and grab it after the race.  This was the case for a Spartan Race my wife and I did in Austin years ago.  We knew we would get muddy and I had water, towels, and spare clothing lined up in the back of our SUV once we trekked back from the finish line.

However, last year I wore a cinch bag on my back for the Cooper River Bridge Run because I wasn’t sure if security would let me through the gates with my GoPro and my gimbal through the corrals (there were no issues).   If you watch my video from that race (the Cooper River Bridge Run), you will occasionally see me pull the drawstrings to make it more comfortable.  I could have done bag check but my bag was relatively empty and its only purpose was to hold the GoPro.  Afterwards, I figured I wouldn’t carry a bag again.  I would check my bag every time I bring it.

Earlier this year, I brought a bag for gear check to the AllState Hot Chocolate 15k in Atlanta and I don’t regret it.   It was rainy and cold, and when I crossed the finish line, I was freezing.  Having a change of clothes helped out immensely.  That would not have been a good time to carry a non-water repellent bag through a cold, wet 9.3-mile course and expect my spare clothing to be dry afterwards.

But back to the Get to the Green race, each time I saw or passed someone wearing their bag on their bag, I kept thinking that they didn’t plan to have that with them.  While it was only a 3.1-mile course, the weather was a little cooler than most expected, and I believe that a bunch of people shoved an extra shirt or jacket in their bag thinking it would be okay to check in or to carry along the course. 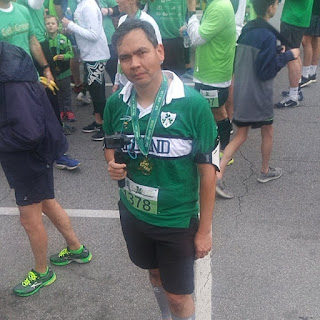 Carrying a cinch bag or a drawstring bag can be an inconvenience while out on the course.  If you aren’t sure if a race offers a gear check or not, I advise leaving anything extra in the car or have someone come along to the race and have them hold your gear for you.  Check the race website or ask them on social media about gear check.  Most race organizers have at least a Facebook page if not also a Twitter and Instagram account as well.  For me, my son played the pack mule for the Get to the Green race because I initially had a jacket on me before the race.   If he wasn’t with us, I would have left the jacket in the car.