Running with a Dog… An adventure with Paddington


Paddington is my four-year-old dog.  Well, he loves my youngest Tori and me the most out of the family.  Paddington will follow either of us everywhere and he doesn’t like when either one of us raises our voice.  He is such a cuddly dog and he loves to lick.  But he goes crazy whenever there’s a mention of the word “leash” or when the leash is accidentally bumped and makes a jingly sound. 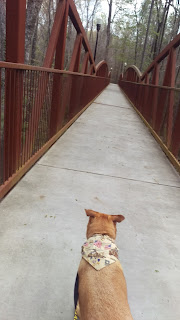 My wife started walking with Paddington to get him out of the house.  I started to run a mile with Paddington sometime two Springs ago.  In July-August, our city holds a 5k race to help raise funds for Police K-9 units, the Guardians of the Night 5k.  It’s a pretty fun event, and as you can guess, takes place at night.  The county sheriff’s department blocks off a route and hundreds of people walk, run, or jog and so a lot of dogs.

The first time I took Paddington on this race, he wasn’t ready.  I had a GoPro harness on him, but instead of an action camera, he carried a small speaker to play music as we would run the course.  While the harness and speakers were light, Paddington was not in shape to run 3.1 miles yet.  I still believe he didn’t drink enough water that day, and being the eager dog that he is, Paddington sprinted at the start of the race.  I should point out that the first song on our playlist for everyone to hear was the Baha Men’s “Who Let the Dogs Out.” Of course, it HAD to be that song at the beginning.  We passed a lot of people and dogs and when they saw this 60-pound dog running and blaring a dog anthem, they all laughed and cheered him on.  But Paddington loved to sprint and that we did… for the first quarter mile.  After that, he was ready to trot, not run or job, but trot.  We went along the rest of the course, but at my pace, and with the running playlist still going.  We eventually finished the race, and Paddington took in a lot of water at the finish line.  We had fun that night, but I vowed to get Paddington ready whenever we have a race that I would him along.

Paddington and I at the 2017 Guardians of the Night 5k

Last year’s Guardians of the Night 5k went a lot better.  I took Paddington out six weeks prior to the race and ran more with him, increasing the distance every couple of weeks.  He still wore the GoPro harness and speakers, and we still started the race with the Baha Men song (which will probably be a tradition for us now), and this time, he finished the race a little faster and less tired than the year prior.  Paddington’s tongue was not hanging out like some towel dispenser in a public restroom.  After the race, I let Paddington rest but would occasionally take him on a run if he knew I was hitting the pavement. 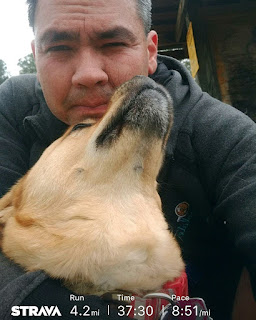 This winter has been very unusual down here in the South.  One day, it can be freezing, but the next we could hit temperatures between the 70s and 80s degrees Fahrenheit (21 to 26 degrees Celsius).  But I’ve been getting Paddington out there every so often.  Today, we ran four miles and as usual, he wanted to start sprinting.  He’s getting better at not completely spazzing out and trying to charge ahead for the first quarter mile.   But there are some things I cannot get Paddington to stop doing like chasing birds and squirrels, and boy does he like to chase them.

There is a preview race later this week, a preview for the See Spot Run 5k, that I might take Paddington to and see how he does.  He’s going to act crazy, but at least he’ll be able to run and finish 3.1 miles with no issues.
Posted by Will Rowan at 10:37 PM