This past Saturday I organized an event for the Columbia chapter of Team Red, White, and Blue.  Six of us took off on our bicycles for a ride on Timmerman Trail that came out to be an unplanned 13 mile journey.  I originally thought we would do either a four mile loop or an eight mile out-and-back trek.

I'm known in the group for filming the local races and I sometimes record my bike rides.  However, this time I wanted to use the camera function of the GoPro Hero 6 and get some snapshots of our time out on the paved trail.  I set the GoPro on time lapse mode with a one second interval.  I didn't adjust anything of the the other settings, meaning that I left everything else in factory settings.  I used a two point expendable selfie stick and would occasionally adjust the stick to be anywhere from 25% to 50% longer than its default shortened size.  Throughout the journey, I ended up with over 5000 pictures to sift through and sort. 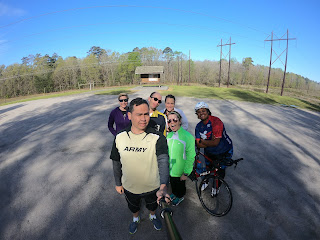 We start with the obligatory "beginning" picture.  There were only six of us, but I attribute that something I call Columbia's running problem.

While Columbia, South Carolina isn't big enough by itself to be one of the top 100 most populous cities in the United States, there is no shortage of races to be found during running season or within a hundred mile radius. But usually, there's at least a race on Saturday in the capital, and I think on this particular day there were two in Columbia and at least one in one of the neighboring towns.

We left at the SCANA entrance for what I thought would be an easy ride.  We ended up splitting into two groups because half of us were entranced by a circling hawk over our heads.  Those not interested in eyeing a bird of prey who was seeking its food left.  The rest of us headed out about two minutes later. 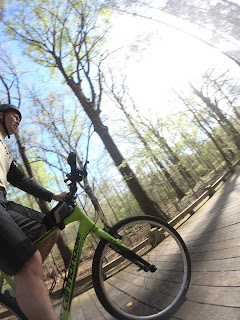 A little into the ride, I decided to play with the selfie stick.  My first attempt wasn't special but it was a start.


As time went on, I got more adventurous with using the selfie stick and picked up some good shots.

As you can see from the first few pictures, the Timmerman Trail is a paved trail, meaning you can take a road bike on here with no issues.  I have a hybrid Cannondale and feel much more comfortable on that than a road bike. Besides, I like the idea of riding on a dirt trail as well. 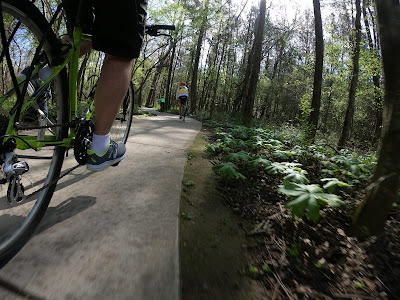 You can see the people in my group were riding road bikes as I slowly chugged along. 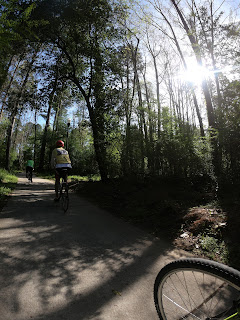 The first couple of miles has a view like this.  We hug a smaller creek and even ride along the Congaree River for a bit, but in the short loop of the Timmerman Trail is a long view of trees and make riding much cooler, in both senses.

The picture on the left is a typical view from the GoPro while it rested along my handlebar.  Amazingly, I had no issues using the hand brakes on the bicycle while keeping the selfie stick across the handlebar.


I did play with having the selfie stick in front of my bicycle to get an interesting view.  These pictures are from different parts of the Timmerman Trail on our ride. 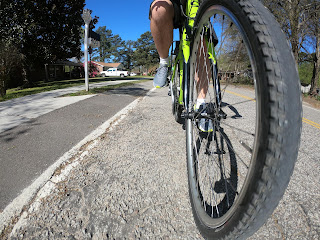 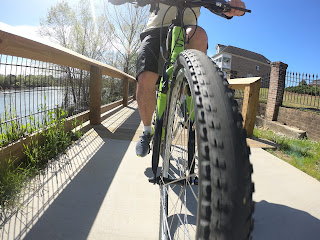 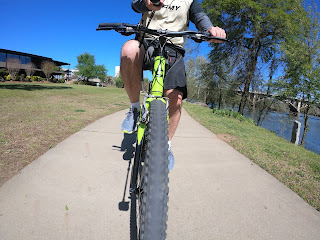 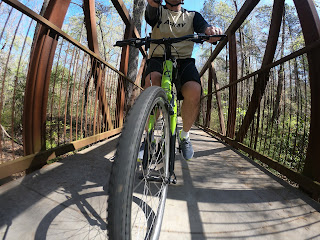 Eventually, we reached a point on the Timmerman Trail I haven't ridden on before due to the floods the Columbia area experienced two years ago.  A few weeks ago, maybe two months ago, the repairs were finally completely and the SCANA entrance was now connected to the West Columbia Riverfront Park and Amphitheater area.  This was good news and meant that runners, cyclists, and walkers could enjoy a longer trek. 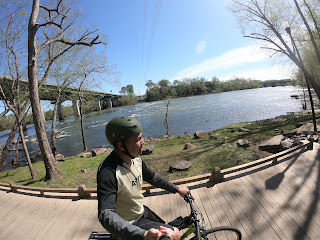 Hanging out at the Riverfront River and snagging a quick pic with the Congaree behind me. 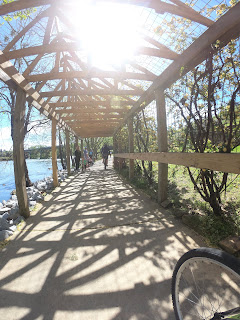 This wooden terrace-work along the Congaree River is definitely new.  It is still fresh and doesn't look like it has any rain. 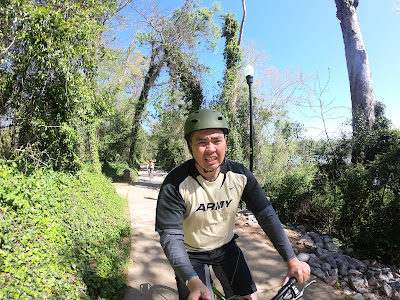 On the way back, I wasn't trail bike. At least for long... 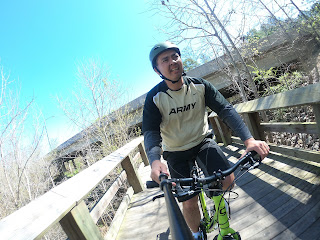 Towards the end of the trip, I managed to get a picture that made it look like I was going much faster than I really was.  In fact, I was going pretty slowly under the bridge because I have a tendency to wipe out in this area. 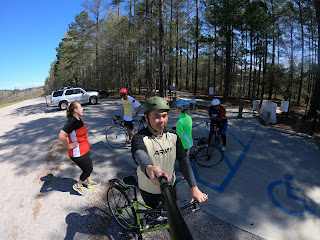 At the end, we all met up and started racking our bikes on our respective cars, but I managed to get a pic before everyone parted ways.

While I missed out on races like the Bunny Hop 5k, it was good to hang out with some friends and vary up my exercise routine.  We also introduced some of them to what I consider a hidden gem in Columbia with the Timmerman Trail.  Not many people come out and run out here, but I hope more come enjoy the scenery and sights soon.