Everything I know about the Cloud Edge Moon

***19 JULY UPDATE***
If you sign up for their email, On will make the purchase for the Cloud Edge Moon available at the following time on 20 July:
9:00 am Pacific Time
12:00 pm Eastern Time

You can check out more from them here: On's CLOUD EDGE MOON Pre-Order

I received an email from On this morning that they would be releasing their first collector’s edition shoe, the Cloud Edge Moon to commemorate the 50th anniversary of the Apollo 11 moon landing.  I bought the regular Cloud Edge when it first came out over a year ago as a limited edition shoe, so my interest peaked when I saw this, especially since the Cloud Edge is such a durable shoe that I still wear to this day.

From what I’ve learned so far, the Cloud Edge Moon will be limited to 999 pairs available and will only come in white and metallic gold.

and my follow-up review of them here:

Back to the Cloud Edge Moon, the shoe is mostly white with a metallic gold tongue and gold back heel pull tab.  The white and gold shoe laces are the speed laces that are typical for the On Cloud and the Cloud Edge/Terry.  That means that you don’t tie the laces, but instead you do the initial adjustment before putting a knot at the end of the laces to keep them in place.  I love these laces and wish more shoes would use this design. 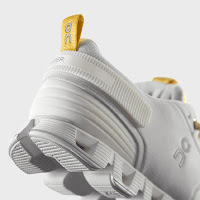 There are two spots that On added a Velcro tab, as inspiration from the astronauts’ gear.  The front Velcro strap will feature the number of the shoe along with the total number of shoes made. So, if your order was 573, you should see “573/999” printed on the front strap.  The back strap is for some sort of personalization that you can send to On when you order the shoes, but I don’t know the number of characters can be used. 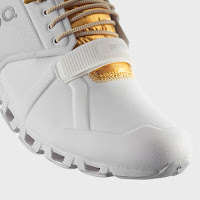 One of the features is a great nod to the lunar landings, but not everyone will see it.  On the inside, the sock liner has a partial picture of the moon, earth’s only natural satellite printed on it.  That’s pretty cool, but again, how many will see it unless you take the shoe off to show people?

Of course, this wouldn’t be an On shoe without their Cloudtec pockets, and it looks like the Cloud Edge Moon is definitely aligned with the On Cloud's outsole.


The only issue I have with the shoes is the price. At 250 U.S. dollars, these are definitely a collector’s edition shoe, but for that price I could own two pairs of the On Cloud or even get that Nike Vaporfly 4% that everyone has been raving about for the past year.  Still these shoes look phenomenal from what I’ve seen, but it would be very strange to casually race in them or wearing them every day on non-special occasions.