Most non-marathon races happen on a Saturday.  But since it was Veterans Day weekend the Veterans Day 5k was not on the typical Columbia weekend run and I got to enjoy my sleep.  And I forgot to look at the race calendar to see what would be happening on that Saturday, so there’s that, too.

I ran in the inaugural USC Veterans Day 5k last year, and one of the much faster runners inadvertently changed the course and everyone followed their lead, including me.  It made for an interesting time while crossing Assembly Street with traffic coming at us both ways.  (see last year's race by clicking on the video.)

This year, the course route significantly changed, and it would start and end in different spots.  The route started by the Long Street Theatre, went around the Horseshoe perimeter, made a couple of turns, and ended at 920 Lady Street.

Sunday afternoon, I headed out very relaxed and ready to go.  Packet pick-up started at 11:30 AM, and would go on for the next two and a half hours.  I arrived at one of the UofSC parking lots and dropped my stuff off at the library around 1 PM.  I hung out and talked with some of the college kids working, to which one of them asked me about the race.  It seemed that she got stuck in traffic during the Tunnel to Towers 5k the other month and didn’t want to have that happen again. I assured her that the race wouldn’t linger past her work schedule, and that the end was off campus so she would have no issues.

After a little bit, I go outside and walk up for my packet pick-up.  I see quite a few Team RWB shirts surfing among the crowd which was amazing because I do not recall anyone talking about it on the local RWB Facebook page.  Of course, my RWB shirt was in the wash because someone spilled a drink on my stuff and my Columbia Running Club jersey was nowhere to be found.  Instead, and thankfully because of the slightly cooler weather, I would wear my cotton Columbia Running Club t-shirt for the race, so at least I would represent one of the two organizations out there.

As I mingle among some of the participants, I spot Bob Caslen, the President of the University of South Carolina and retired Army three star general and he was ready to run.  Cocky was out there, too, and it was hard to figure out which one of the two ended up in more picture taking opportunities for social media.  #uofsc #cocky #gococks #goarmy #toomanyhashtags. 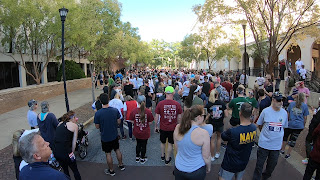 Eventually, we all make our way to the starting line.  According to raceroster.com, 388 people signed up for the race, but I believe there were over 400 out on the course.  The national anthem is sung and once the buzzer goes, we are off.

I follow the crowd before me, and everyone makes a right after passing the Long Street Theatre.  I have my Halo 3 theme music going in my Aftershokz, GoPro in my hand, and I’m weaving around strollers and walkers.  I’m enjoying myself as I get close to the gate blocking vehicle traffic on Greene Street.

And then several of us hear a woman say we were going the wrong way.

I could see a long crowd of runners still going forward, but those of us from the back only had the minimal amount of turnaround distance to do.  I feel this certain energy coursing through my veins and I somehow sprint back onto the correct route, and sprinting at the beginning definitely goes against what I used to tell my Soldiers when I was still in the Army.

I got back on track and there are very few people in front of me.  Eventually, I pass enough people that for a brief quarter-mile I am one of the top ten runners of the race.  Technicalities and mishaps aside, I took that in stride and ran a little faster.  It wouldn’t last.  Slowly, and one by one, the fast pack of runners catch up and surpass me.

We make it to Bull Street, one of two uphills in the race, and this one is THE dozy.  It’s steep and it has four Marine drill instructors “encouraging” us get up that hill.  They were very animated. And vocal.  I run up the hill past all four, and about 50 feet past the final one, I slow down to a walk.  I can hear the last drill instructor behind me yelling that I should not be walking and that I needed to keep running.  At this point, I’m near the apex the hill, and I spot two volunteers to which I tell them as I start running again, “if I wasn’t retired, I might have been intimidated by them,” meaning the Marines.  They laughed.

I hit the water stops along the route and one of them was on Assembly Street, the other not-as-steep uphill.  After cresting the hill, I run by what looks like at least three platoons of Army drill sergeant candidates, who were out there actually encouraging us with signs, dancing, and clapping.

The route had us running in front of the state capitol grounds, and a squad of UofSC cheerleaders followed suit with the Army by cheering us on.  A couple of turns later, I made it onto Lady Street.

Lady Street felt weird.  I am so used to driving on it, that I never really get to take in how downtown Columbia looks like a normal metropolitan area, and I do not mean that in a bad way.  This time, I’m running down it and soaking in the building architecture.

Eventually, the finish line is within eyesight and the crowd within earshot.  I sprint from the final traffic light and pass Cocky.  That bird is everywhere.  More cheerleaders line the finish line, motivating people as they approach.  I finish with one of my slowest times ever, but it was worth it. 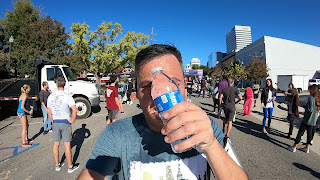 I did not stay for the after-party or the awards ceremony because I had some sick kiddos to get back home to, but those who finished (and had the proper ID) got a free beer and sliders from Carolina Western Pub.  The race packet included a performance shirt and an FN America baseball cap.  I’ll take a hat in a race packet any day.

Other than the initial hiccup at the beginning of the course, it was good; the crowd and atmosphere were in happy spirits, and any chance to support raising money for the Fisher House is a-okay in my book.


The video for the race is below, check it out.