The Superhero 5k in Columbia Recap 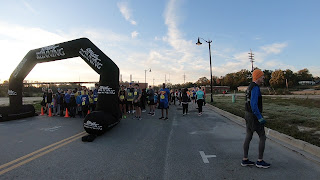 Strictly Running is great.  I received a reminder email from them about the Superhero 5k a little while back.  I checked my schedule and saw that while I would work at the library that day, I did not have a race scheduled on the calendar.  I ran the DC Wonder Woman 5k the previous week, so I figured that if I participate in the Superhero race, I could wear that sweet red shirt I got from the previous run.

And then my youngest, Tori, wanted to run in the race.  Years ago, Tori dressed as “Princess Hulk” when we lived in Texas.  Amanda thought it would be a good idea for Tori to reenact that again, but this time for a run.

Friday afternoon, I head to Strictly Running for packet pick-up.  They have everything ready, as usual, and it was quick.  In the bag was my bib, a bright yellow shirt, literature on child abuse awareness, and a voucher for a free game of bowling.

Saturday morning rolls around, and it is bitter cold.  I verbally ask Google for driving directions to “Segra Park,” but each time I do, my Android phone insisted on giving me three day directions to Sequoia National Park in California.  Five times.  So much for a traffic update, but at least I know where I’m going. Tori and I drive down I-126 to get to the baseball stadium, and the Broad River had a thick layer of fog slightly rising around it.  It made the Columbia skyline look amazing as we drove closer to town.  I haven’t been to Segra Park since it was renamed, and construction happening around it threw me off for a bit.

We arrived and parked the car.  Since it was still cold and we had 15 minutes, Tori and I sat inside for a few minutes before we braved the 37 degree weather.  She had her Hulk outfit on, but she put Amanda’s old high school cheerleading sweatshirt on over it, and decided to wear a Stranger Things’ Scoops Ahoy hat instead of a tiara.  I guess season three of that Netflix series needed someone to get angry and go green.

In the meantime, I watch several people wearing bibs get out of their vehicles and walk around the stadium.  At the ten minute mark, Tori and I get out of the car and start walking to where the others headed.  I make it five feet when a woman stops me and asks if my daughter and I were going to the race, and I reply yes.  As I answer, I turn completely around and both of our bibs are in clear view.  The woman asks us if we are running in the race or if we are here to show support, and I say “yes we are,” thinking the bibs are a dead giveaway.  She then tells us that she thinks we are going the wrong way because someone told her that the race started somewhere “north on Turner Street.”

At this point, I’m so confused after watching at least 15 people walk around the north side of the stadium heading west and I have never heard of Turner Street.  I tell her that I watched several people walk around the stadium, and she replied that maybe I should ask the people at the stadium to make sure.  Tori and I hurry towards the stadium and we see other people trickle out of their cars and head westward… like slow moving, cold shivering miners looking for gold. 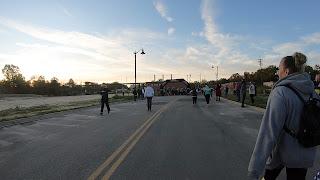 We make it to the starting line with about five minutes to spare.  I spot Alex McDonald (pulling picture taking duties), Naomi Rabon, Jen Kryzanowski, Rocky Soderberg, Kerri Stubbs, and Clara Nance among the mass of running attire and costumes flowing throughout the start line assembly area.  Tori initially wanted to walk the course, once the race started, she was right behind me running along. 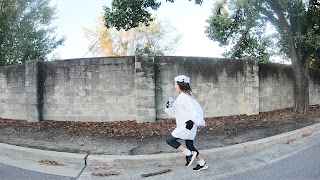 We head north running around many costumes and capes along the way.  At the half mile area, there’s this hill that looks a little intimidating, especially for a kid who doesn’t like the cold weather.  I keep telling Tori that we need to keep a good pace, especially since other children her age are sprinting and wearing themselves out before the first mile.  We trod up the hill and make it, but eventually Tori needed to walk near the 1 mile mark.

We make the corner at 1.5 miles and I notice a bunch of people in blue shirts walking towards us.  I didn’t remember seeing a mass of powder blue shirts at the starting area, but Tori had slowed down quite a bit since the 1 mile mark and I just chalked it up to… fast walkers?

As we pass the third group of blue shirts, Tori remarks that the shirts all say “Heart Check” and both of us thought it was pretty neat that two events cross paths around the same time.  I bet the police and both event volunteers had an interesting time keeping streams of traffic from both events safe and on the right path.

As we continue past the sea of blue shirts, Tori and I push up a hill and keep going, and the next mile was so flat that was quite refreshing.  As I run along, I reminisce on the Bunny Hop 5k that Tori and I did around there a few years ago.  We go around a few corners and make it down Calhoun Street, and I mean down because of the decline.  Tori and I turn left towards the stadium, and at this point, I have to remind Tori that we are almost done… because she IS done. It’s cold, she hasn’t run in a few weeks, and she wants to go get a Cherry Icee (Stranger Things reference).

I make a deal with Tori that she will get an Icee if we finish strong.  She agrees, and I try to pump her up mentally as we round the corner and head along the walkway to the stadium interior grounds.  Tori didn’t care, but we sprint to the finish line and walk to cool down.  She and I finish around the 36 minute mark, but that didn’t matter; we stayed together the whole time.

We had a few minutes before Tori and I had to meet up with Amanda at the Soda City Saturday Market on Main Street, so we checked out the stands, grabbed several bottles of water, a hot dog, and some nachos.  We couldn’t stay for the awards ceremony because I had to get ready for work at the library, and a sick Amanda was probably waiting on Main Street, thus Tori and I took off.  Oh, and out car was so warm after standing around in a slightly higher 40 degrees for 10 minutes or so as we left the stadium and made our way to Main Street.


Please check out my video showing the course, capes, and costumes for the Superhero 5k.