The Cooper River Bridge Run takes places in Charleston around April each year.  It’s one of the most enjoyable road races out there and has consistently drawn in over 25k runners for the past decade.  In fact, the Cooper River Bridge Run is one of the top ten 10k races in the United States according to several sources to include Runner’s World, Active.com, and BibRave. I’ve participated in the race the last four years and there's a bunch of reasons I come back each year.

Before you decide for the Cooper River Bridge Run, here are five things you should keep in mind. 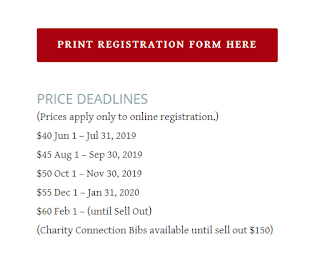 1.     Sign up as soon as possible.  The registration window opens about a month after the last event, and operates on a timed tier throughout the year.  While the most expensive registration is still cheaper than a lot of races I’ve been to, I’m fairly certain people want to save money.  Below, you can see the pricing for the 2020 Cooper River Bridge Run and the time frame for each registration fee. (screenshot the registration prices)


2.     Hotels book up quickly several months before the race.  The very first year, I waited until about two weeks to book a hotel.  That didn’t go well, because my family of five ended up at a budge motel about 10 miles from the transportation site.  Since then, I’ve booked a hotel near the North Charleston Convention Center each year months in advance and haven’t regretted it once.  In fact, several hotels, restaurants, and a large shopping plaza are all within walking distance of the Convention Center, which also doubles as transportation hub for the day of the race (more on that later).  With roughly 30k people taking part in the Cooper River Bridge Run, it definitely pays to book a hotel in advance.

3.     The 2-day Expo is one of the largest you will attend.  As I just mentioned, the Cooper River Bridge Run Expo takes place at the North Charleston Convention Center.  It happens on the Thursday and Friday before the race.  Most “locals” go to the Thursday event, while the out-of-towners, and people from out of state and even out of country, attend the Friday event.  Last year, my wife and I managed to go early on Friday to the Expo and we were surprised at some of the free samples and extras vendors gave away.  We ended up with a couple of moisture wicking shirts, a few leggings, and little to no lines for the various alcoholic vendors, such as Deep Eddy Vodka, Hooch mixture, and wines sampled by Harris and Teeter.  Showing up Friday after 1 PM, though, will have you see large crowds, long lines to try things, and certain vendors run out of their best wares.

4.     Plan accordingly for race day transportation.  The Cooper River Bridge Run is a one way race, meaning that the start line (in Mt. Pleasant) and finish lines (downtown Charleston) are in completely different areas.  The race organizers have arranged for transportation, and in at least one of the places, free parking for participants.  At least four designated bus shuttle areas are available for free. For a small additional cost while registering, one can choose to take a boat shuttle to cross the river from Charleston to Mt. Pleasant.  Every year, I have chosen to take the bus shuttle from the Charleston Area Convention Center.  The Convention Center is probably the most popular shuttle area since it has a very large parking lot, is close to the Charleston International Airport, and about a dozen hotels are within walking distance of the shuttle pick-up and drop-off point.  Check out the CRBR shuttle information here: https://bridgerun.com/bus-boat-shuttle/

There is no parking available at the starting point, but in the past couple of years, some of my friends have done ride-sharing, i.e. Uber, Lyft to get to the starting line from where they stayed the night before.

5.     You have a voice in next year’s shirt design. I don’t know how long the race organizers have been doing it, but the past few years, they solicit people to vote on submitted artwork and the winner’s artwork becomes the poster and t-shirt design.  For 2019, the artist received 1,000 dollars as well as 100 posters and 24 shirts (presumably to give away to friends, family, fans, and as giveaways).  For participants, it makes you feel even more a part of something big.  You can read up more on the CRBR blog page here: https://bridgerun.com/submit-your-vote/

These are five things you should know before you sign up.  Unlike a local race, it does take a little planning in advance to do the Cooper River Bridge Run, but it is well worth it.  I live 90 minutes away from Charleston, and with a little bit of foresight in advance, I make sure I’m ready for race day.